A few days ago, Mastercard Asia/Pacific Ltd. has received a patent from the European Patent Office, which the company had already filed in February 2019 and which is entitled ““. The patent, which was approved on August 20, thus not only references the IOTA Tangle in a general and broad way to secure any rights, but apparently builds on the Tangle as a central component, as the title suggests.

Specifically, Mastercard obtained a patent on a “method for billing device usage through a transparent data storage system and aggregation”. The patented method includes receiving user credentials from an input device of a device controller, capturing usage parameters of a hardware device connected to the device controller via an interface, and sending a usage transaction of the hardware device to a transparent data storage system, which can be the Tangle or a blockchain, as a look into the patent reveals.

In addition, the method also includes receiving the usage transactions, which are composed of the user data and a charge amount, by an aggregator node from the data storage system. As further described in the patent, the aggregator node should be able to generate an invoice for each user based on the usage. The following figure shows the relationships between the individual components of the system. 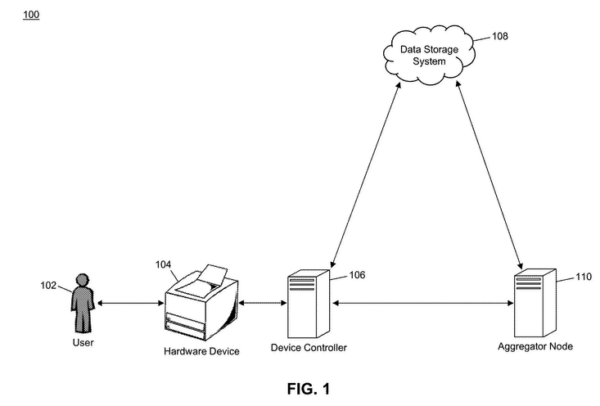 The term Tangle of IOTA is mentioned 17 times in the document, with Mastercard also defining the term:

Tangle—A directed acyclic graph (DAG) for storing transactions. Similar to blockchain, the Tangle is decentralized and distributed, with participants approving other transactions entered into the Tangle. When a new transaction joins the tangle, it chooses two previous transactions to approve. The chosen transactions can be selected randomly, or through any suitable criteria. […] Additional information regarding the operation of a Tangle can be found in the whitepaper where the Tangle was first introduced, “The Tangle” by Serguei Popov available from iota.org.

Within the scope of the patent claims Mastercard Asia/Pacific has secured a data storage system which can be based on the tangle as well as on a blockchain:

The method of claim 1, wherein the transparent data storage system is a Tangle.

The method of claim 1, wherein the transparent data storage system is a blockchain.

With respect to the data storage system, the patent also states that it can be any type of data storage system “which is made transparent so that usage information is accessible to users and/or any interested party”. Mastercard describes how it works as follows:

The patent further states that the use of the Tangle or a blockchain allows full auditability of device usage and billing, enabling a user or site operator to verify billing inaccuracies or fraud attempts. Thus, the system offers a number of technical advantages over traditional systems and solves the problems often encountered in these systems.

The invoice generated by the aggregator node can be transmitted to “a computer device connected to the system”. This allows the user to receive the invoice via email, short message service, a website or application program. The invoice can also be sent to third-party services such as PayPal. Invoicing and subsequent payment via IOTA or another cryptocurrency is also conceivable, as Mastercard Asia/Pacific writes:

In some embodiments, the user may be billed through the data storage system, such as for payment via a cryptocurrency operated through blockchain or Tangle.